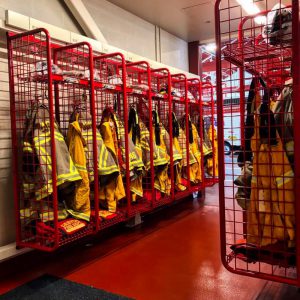 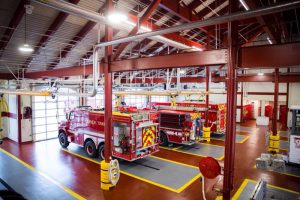 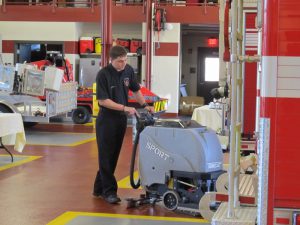 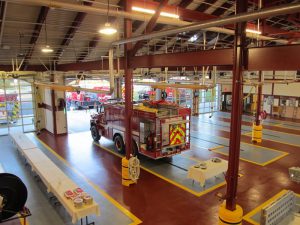 Scope of Work: To install Dur-A-Flex epoxy floors in a 10,000 sq ft facility in the main apparatus bay area, the apparatus storage areas, and in the kitchen.

On January 10th, 2017 the town of Carver, Massachusetts officially opened the doors to their new Central Fire Station and Training Facility. Thousands of hours were put into the design phase of the project to ensure this facility met current and future infrastructure and technology needs to allow the department to best serve the residents of Carver for years to come. With a budget to stick to, tough decisions needed to be made of what was essential for the new facility. One non-negotiable item? An epoxy floor system.

Chief Craig F. Weston had learned about the many benefits of epoxy flooring in a firehouse at a trade-show and he knew it was a must-have item for Carver’s new state-of-the-art facility. While durability was the most important requirement, cleanability was a close second. The floor plan called for 10,000 sq ft of epoxy floors in the main apparatus bay area as well as apparatus storage areas, and a kitchen. Dur-A-Flex’s Shop Floor system was chosen as the floor system of choice for all areas with the exception of the kitchen where Dur-A-Flex’s decorative Dur-A-Chip system was chosen. Shop Floor is a solid color, epoxy floor system consisting of 100% solids epoxy and quartz aggregate for slip resistance. The system is finished with Dur-A-Flex’s chemical and wear-resistant urethane topcoat, Armor Top.

Since it was a new facility, a new concrete slab had been poured. Yet there was a minor hiccup when the trench drains were set 3/8” higher than the concrete slab. To remedy the issue, the installers had to feather out around the drains 18” with an epoxy mortar so that once the floors were complete, water would easily move to the drains for simple cleanup after equipment wash-downs.

The Chief was elated with the finished product and notes that the floors are cleaned daily to reflect the pride the crew has in their firehouse and in their community. All the effort that went into designing this facility was recognized when the project was nationally recognized and received GOLD status by the 2017 Firehouse Station Design Awards.