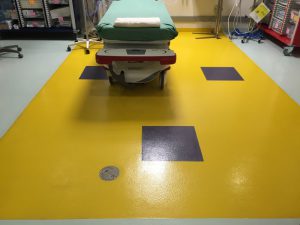 Facility: The Children’s Hospital of the King’s Daughters (CHKD)

Scope of Work: Install a decorative cement-based Dur-A-Flex resinous coating system in the OR and the trauma bays in the ED

The Children’s Hospital of The King’s Daughters (CHKD) of Norfolk, VA has a single focus — children. As the only free-standing children’s hospital in the state they are committed to delivering excellence in the service they provide to their patients, starting with their care and extending down to their facility’s floors.

Working through their architectural firm PF&A Design, a firm specializing in healthcare design, CHKD has continuously upgraded their facility. They have done so without shutting down any entire area; allowing their staff to continue the life saving work they do for the families of Virginia. While seamless flooring had been specified at CHKD in the past, underlayment failures led to unsightly pitting and cracking on the floor’s surface. This led the architects to search for a superior floor system that could be installed quickly, match the décor of the rooms and also tolerate the constant traffic of the heavy machines and beds being moved around — a tall order.

The solution? Dur-A-Flex’s line of Hybri-Flex E (epoxy) flooring systems. Hybri-Flex floors are anchored by a cement-based, urethane that allows for maximum adhesion with a substrate thanks to its self-priming properties. Within the Hybri-Flex floor line the decorative options are endless and the architects were able to choose from vinyl chip blends, decorative quartz blends, or solid color floors depending on the room. The Hybri-Flex E systems also offer a final urethane topcoat which possesses excellent wear resistance and UV-Stability, allowing the floors to stand up to the bustle of a busy hospital while not losing aesthetics.

The first floor to be upgraded was OR #1, a Hybri-Flex EC (epoxy chip) system was chosen, and a custom chip blend was needed. The architects were able to create customized blends on Dur-A-Flex’s website via the Custom Chip Selector tool; adjusting size, color and ratios until the designs were narrowed down. Physical samples were created in Dur-A-Flex’s Design Center and shipped to PF&A’s Interior Designer, Kimberly Bernheimer, for approval. Commonwealth Epoxy Coatings, Inc. of Newport News, VA, the flooring installer for the multi-phase project, expertly used the two chosen chip blends to create a sterile-circle in the room.

Another area to be upgraded was the trauma bays within CHKD’s Emergency Department. Again the architects of PF&A Design chose a Hybri-Flex floor system; Hybri-Flex EB (epoxy broadcast). To meet the hospital’s request to create a “zone” work-space, a floor layout was created that would visually show each member of the medical team where to stand when a patient is wheeled in. The hospital chose a bright yellow floor with custom colored purple squares; the bright colors were a concerted effort by CHKD to draw attention to the floor. Yet before any floors could be installed, trenches were added for new piping and new concrete poured. Normally in the flooring world, a new concrete slab puts a halt to projects for at least a month. Yet Hybri-Flex floors can be installed over green concrete, as new as 5 – 7 days old, allowing projects like this one to stay on schedule.

Dur-A-Flex’s Hybri-Flex floors have provided this hospital with extremely durable, simple to clean surfaces in several of their most critical rooms. With Dur-A-Flex floors already installed in 4 rooms and another 5 OR’s slated for the next several years, it’s clear that continuous improvement at CHKD really begins from the floor up!