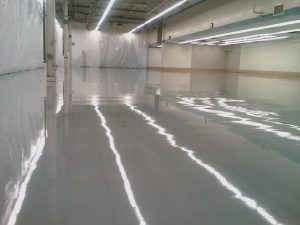 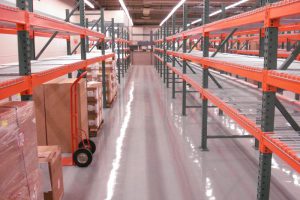 A leading manufacturer of biomedical testing instruments was in need of a new flooring system for their Brea, California facility. Due to elevated moisture levels, the tile floors in their facility were failing. The client had two major concerns when it came to choosing a new floor; maintaining conductivity in their facility and eliminating the constant repairs caused by high vapor emissions.

After speaking with a maintenance manager at a neighboring facility that already had installed a Dur-A-Flex Poly-Crete® MD floor system, a site visit was arranged. Impressed with the floor and encouraged by the maintenance manager’s high praise, it was decided that a Dur-A-Flex floor would be the best solution for their own facility.

Before the new floor could be installed, a flooring evaluation uncovered that the floor was blistering in spots. A moisture test showed that the floor had between 8 and 10 pounds of moisture and excessive amounts of sodium silicate present. To correct these two factors, it was suggested that a separate moisture mitigation system be installed.

With 15,000 sq. ft. installed, the Dur-A-Flex floor provided them with an aesthetically pleasing system that tolerated high vapor emissions while maintaining superior durability. By reducing the frequency of floor repairs, they were also able to cut the overall labor costs associated with maintenance!