Flooring is a Home Run! 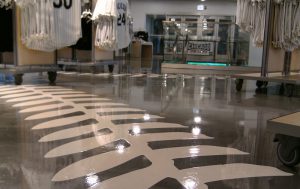 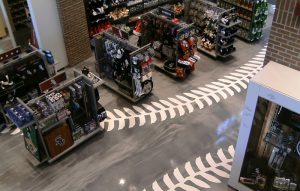 When the planning began, the design firm was challenged with creating a unique, functioning retail space with an obvious athletic theme. They came up with a baseball concept emphasized via newspaper clippings and player murals strategically placed throughout the facility, and incorporating the same theme right down to the floor. The floor’s design was to depict the stitching of a baseball, creating a focal point with a purpose – to subtly direct customers throughout the store and maximize merchandise exposure.

The flooring contractor stepped up to the opportunity to be a part of the store’s theme and pitched Dur-A-Flex’s designer flooring system, ReFLEXions. An epoxy-based system offering the desired marbled look with the necessary wear resistance for handling heavy foot traffic, ReFLEXions hit a home run with the design team. With 12 standard colors to choose from and endless options for blending, the system’s Titanium color was chosen. This color provided a glistening shine that offers naturally varying shades of silver and white, complementing the simple Bright White selected for the stitching effect.

With this system on deck, the prep work began. The concrete was shot blasted and all joints were filled. Pre-install testing of the concrete substrate revealed unusually high moisture levels prompting Dur-A-Flex’s Moisture Vapor Primer to be installed first. This top performing primer is referred to as MVP, and rightly so. It strikes out any potential floor failure and ensures season after season of substrate durability.

Once the base coat of ReFLEXions was installed and the stenciling of the stitch pattern completed, the floor was finished with Dur-A-Flex’s Armor Top®. A clear, urethane finish that doesn’t steal the depth and beauty of what lies beneath it yet does offer the benefit of superior wear resistance, Armor Top is formulated for high-traffic areas.

On opening day, patrons of the Chicago Sports Depot reacted exactly as the owners and their project team designers had hoped – they were in complete awe! Greeted by 77 monitors televising an array of sports programs and a staircase lit up by 15,000 LED lights, visitors are instantly drawn to the store’s center field, the amazing floor. It’s easy to see that ReFLEXions Designer Flooring helped the Chicago Sports Depot hit it out of the park!