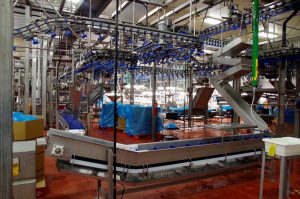 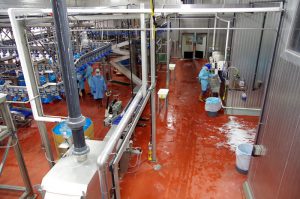 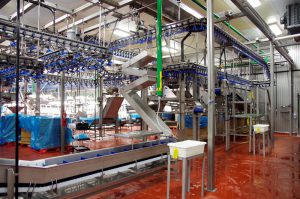 With a tagline as confident as “Bring your appetite,” the Black Angus beef and air-chilled chicken are the main priority at Simply Essentials. The company, which is based out of Kansas, wanted to renovate one of their old facilities, complete with new coatings and equipment. “They were spending I don’t know how much money on the equipment that they were putting in there, so they definitely wanted a floor that could last and handle the day to day operations of their process,” explained Kyle Loseke, director of operations for Treadwell LLC.

It would take a coatings crew that was just as confident to take the nearly bare concrete and turn it into a beefy urethane floor with all the “fixins”.

Although the crew had only four weeks to complete the coating of 24,340 sq ft, they were granted the dream situation for a contractor. “Everything was really wide open so walking into it, it was kind of a dream,” Loseke said. “There really weren’t any other trades in there working for the most part. Once we stepped into the jobsite we really had total control for 3/4ths of the project.”

As Loseke explained, the floor was opened up to them in phases. The first phase that the coatings were applied to also became the first area where the new equipment was erected, so time was of the essence.

Working in 12-hour shifts, the 10 crew members on average started with surface prep. “There were some existing epoxy coatings there,” Loseke said. The crew had to remove the old thin-mil coatings there first. They used a planetary grinder from Husqvarna.

The crew prepped areas that were bare with shot blasting and dust collection equipment from Blastrac. At Treadwell, each person has a role (or two). During the shot blasting stage, there was one crew member manning the Blastrac machine. “He’ll have a secondary guy that kind of bounces around to help him move around the dust collector system, rearrange hoses, to basically keep our guy manning the machine constantly moving,” Loseke said. Then a few other guys prepped the perimeter of the building where the shot blaster can’t go. They used hand grinders for those areas, “making sure that we’re getting right up to the edge of the wall prepped,” he continued.

Because the project also included 12 40-foot-long trenches running parallel, prep also included keying and sloping to encourage the right flow. They applied up to 4 inches of Dur-A-Tex LM mortar, feathering it into the substrate. And they sloped 5,650 square feet in total.

That’s quite a lot of fat to trim!

Cutting the room in 30-foot sections, the crew was finally able to get to the coating portion of the job. There was a method to those sections.

“We intentionally break it up into sections, not only because of the working time of the material itself, but also because it’s unreasonable to expect guys to be on their hands and knees for 10,000 sq ft of material in one shot,” Loseke explained.

After the breaks, complete with stretching and flexing, the crew was able to “hit it again,” Loseke said. They also wore proper personal protective equipment (PPE), such as hard hats, high-vis vests, gloves, and steel-toed boots — “nothing out of the ordinary,” according to Loseke.

And again, each crew member had a specific task. During the coating phase, there were four guys mixing the Dur-A-Flex materials, six guys working with the screed box, and one more broadcasting and back rolling the anti-slip silica sand aggregate.

“After the material was pulled out with the screed box, you’d have guys following behind chasing the screed box,” Loseke said. They’re working to blend each pass together. “So you’re running your screed box out 30 feet, you turn it around, come right back over your wet edge, pour your next row of flooring right up to the edge of your first row, and you’ve got guys following behind blending that line in. It’s kind of a big operation.”

The anti-slip was broadcast to about 75 percent, but the 1/4 inch of Poly-Crete HF was nothing less than a 100. According to Loseke, the trowel down system that they installed on this project is the “Cadillac of urethane cement floors.” Not only does it offer moisture tolerance and thermal shock tolerance, meaning “you can go from extremely hot to extremely cold temperatures and you won’t get cracking or anything like that,” he said. But it’s also “just a very functional, very durable floor.”

To finish it up, the foremen and journeymen installed a 6-inch cove, hitting all 970 lineal feet to the entire perimeter.

Once the floor had cured enough to walk on it, the crew came back in and vacuumed up any aggregate that didn’t get locked into the coating matrix.

“As we got toward the end of the project, getting into our final phases, we had a lot of the flooring complete and other trades were starting to get in,” Loseke said. That required some coordination to ensure that the crews installing the new equipment knew which areas the Treadwell crew would be in and when. “But other than that, it wasn’t your typical summer vacation school job that we might do where you have two months to get the job done and you’re working on top of the electrician, the plumber, the drywall guy and everything is happening all at once,” he continued. “This was pretty well thought out and we essentially had total control of the project.”

At four hours away from Treadwell’s headquarters in Kansas City, the crew had to stay in hotels for the duration of the project. That meant the crews had easy access to the floors, but after the four-week-long project, heading home was sure to have been a sweet treat.