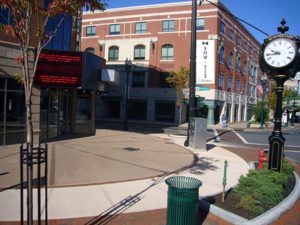 Bow Tie Cinemas is one of the largest independently owned and operated motion picture theater circuits in Metro New York. In the summer of 2007, the outdoor main entrance for the Schenectady, New York Bow Tie Cinema was scheduled for renovation, and the owner was not happy with the look of the exposed aggregate. The existing surface was exposed pea gravel concrete and the challenge was to install a new floor and also create a sun dial design.

All buildings on the street were undergoing major renovations, so the finished surface had stay consistent with the architecture of the main street. According to Project Manager Mark DeLorenzo of BBL Construction Services, the existing aggregate did not have a uniform appearance when completed.

Two issues they had to face with this project was that the concrete sidewalks could not be removed because the theater would be open to the public during the renovation, and there was an extensive amount of snowmelt tubing underneath. The decision was made to use Dur-A-Flex’s Cryl-A-Quartz to resurface the sidewalks.

The preparation began with shot blasting and diamond grinding the surface. Since this was an outdoor project being done on a busy city street, the crew found it necessary to construct a perimeter containment barrier to prevent flying debris from harming pedestrians.

Project Manager Mark DeLorenzo remarked that once completed, the new surface hides all of the blemishes in the concrete, and since the cure of the product was extremely fast, the daily operation of the theatre was not impacted. He also added, “The new surface of the sidewalk really gives a unique appearance to the entrance of the theatre.”