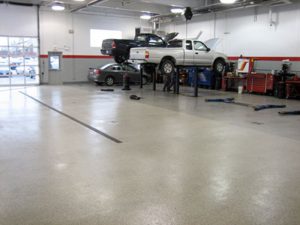 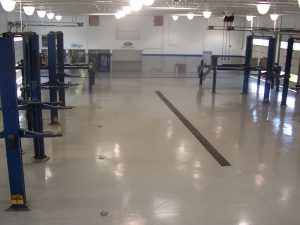 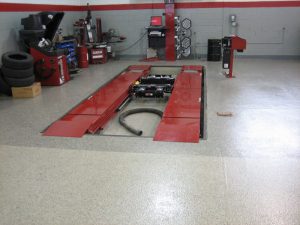 Remodeling projects are proving to be a good investment in the automotive industry. Dealerships are beginning to modernize showrooms and service areas in an effort to be more consumer-oriented, with an emphasis on customer satisfaction.

Orland Toyota is located in one of fastest growing municipalities in southwest Chicago. They have been the proud recipients of the President’s Award for 10 years and the dealership is continuing to expand.

Keith O’Meara, Operations Manager for this family of dealerships decided it was time to re-do the floors in the Service Department at the Orland dealership. According to O’Meara, the floor was in need of major repair—the existing floor had two prior epoxy coatings that were failing. The concrete was cracked and the surface was covered with gasoline, motor oil and dirt.

The first step was to remove both existing coatings from the 12,475 square foot area, re-bond all cracks and install a vinyl chip system. The installers began the project by using planetary diamond grinders for the coating removal followed by shot blasting equipment to remove the remainder of the existing coatings. To seal and protect the concrete the crew to primed the area with Dur-A-Shield. In the next stage they put down a base coat of Dur-A-Gard 50/50 and then broadcast the vinyl chip to rejection. A grout coat and then final topcoat of Poly-Thane #2 were then installed to complete the floor system.

O’Meara said one factor that convinced him to go with another epoxy install was Dur-A-Flex’s explanation of the installation process from start to finish. The installer was true to his word and stayed within the time frame he said it would take to do the job. Another huge selling point was that the floor is durable yet decorative, and the two toned flake broadcast functions as a separator for the different work stations.

O’Meara says that “we are very pleased; everyone loves the look of the floor and so far the floor is performing perfectly.”