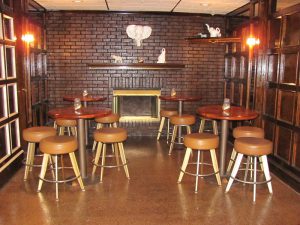 With over four decades of hosting weddings and other formal events, mother and son team, Karen and John Jacobi wanted to add a little extra shine to their popular venue. They began by choosing a new name, J’s White Elephant, and initiated plans to reinvent their image by renovating their facility. In order to project a high-end image, one of the most important aspects of this revamp was replacing the flooring in the banquet hall. A collection of floor coverings including tile, laminate and carpet begged for consistency and a more formal look.

While examining the samples offered by their flooring contractor, the Jacobi’s bypassed the traditional epoxy chip systems and honed in on Dur-A-Flex’s new metallic system. The shimmer and shine from the Mica-Flex flakes affirmed the Jacobi’s had found exactly what they were looking for to define J’s White Elephant’s new image! They chose Gold Mica-Flex for the bar area and Nickel for the main banquet hall area.

Removal of the old floors posed a challenge to the installers but the crew worked with extreme diligence, ensuring a clean, concrete substrate was all that remained once the prepping phase was completed. The Mica-Flex E, an epoxy based system, was installed over 4,000 square feet in less than a week, reducing impact to the rest of the facility’s renovation schedule.

John notes that it was a “drastic difference” when he saw the floors for the first time. Aside from the visual upgrade, the new floors have also helped to reduce some of his safety concerns. “We were very concerned about slip resistance, especially being in a restaurant setting. We discussed this with the contractor and he put aluminum oxide in the topcoat. It’s the most slip resistant floor in our entire building,” he concluded.

With the renovations completed, J’s White Elephant re-opened its doors in early December 2012. “My mother and I love the floors. It was one of the bigger tag items of our renovation so to see it look so great, really gives us the reassurance that we made a great choice. Now, when customers come through our doors, the first thing that literally every single person says is ‘I love the floors!’ We both think it looks absolutely great,” says John.