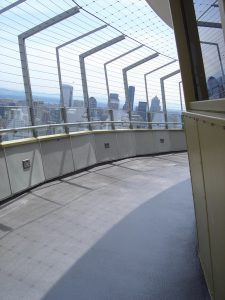 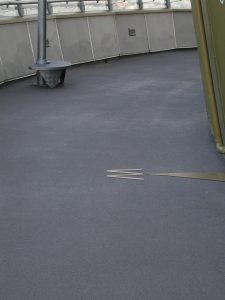 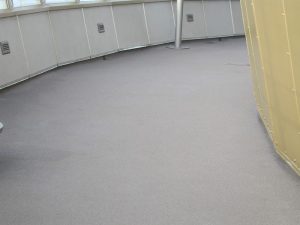 The Space Needle in Seattle, Washington stands 605 feet high; it features 360-degree panoramic views, and is known as the gateway into Seattle Center. It has since become the symbol of Seattle and one of the most recognized structures in the world.

Every four years, the floor on the Observation Deck at the Space Needle had to be repaired. The floor was being repaired so often because the membrane on the floor would detach, there were problems with spalled concrete, and water drained from the Observation Deck into the Restaurant below. When life-cycle costs were reviewed, it was clear there had to be a better solution. Yet, it also was important that business not be interrupted or suspended for any length of time.

Since the Restaurant, Observation Deck and Gift Shop are open from 9:00 am to midnight 365 days a year, a system had to be chosen that provided minimal downtime. Dur-A-Flex’s Cryl-A-Quartz SL flooring system was chosen as the flooring solution because this material cures to full strength in less than one hour and is able to withstand the elements both indoors and outdoors.

As the installers got to work on the project removing the old deck coating, they found that the slope of the deck and the pitch to the drains was far greater than anyone had anticipated. It was not sloped to the drains, it was sloped to the outside of the drains and water would puddle on the outside edge and cause leakage into the electrical/plumbing room and into the restaurant below. To facilitate the correct pitch, Dur-A-Flex’s Cryl-A-Tex polymer concrete was installed prior to the installation of the floor system. The project continued on without any further hiccups with installers working through the night when the facility was closed to allow for it to be open for normal business hours the next day.