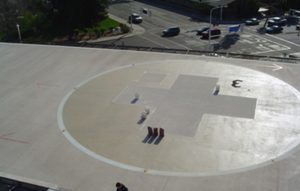 The facility had three helipads on the rooftop of their level one trauma facility. Two of the helipads were the same size and one was about 25% larger. The material used to coat the landing pads was a rubberized pedestrian auto deck material, and the damage caused by the helicopters landing was very visible. If left untreated, there would be problems during take off and landing and it would jeopardize the safe transport of their trauma patients.

The hospital needed a durable system that could be installed quickly and still allow them to conduct their every day emergency landings. To allow minimal disruption, it was decided that each pad would be completed before starting work on the next one.

A Dur-A-Flex MMA system, Cryl-A-Quartz, was chosen for this application for its durability and non-temperature sensitive application time. Removing the existing rubberized material was achieved by utilizing a ride on scraping machine. The flooring contractor was told at the beginning of the installation that the crew would be given six minutes notice about an incoming helicopter and they had to clear the landing pad and be off the roof. No exceptions!

Another requirement was that the letter “H” on the helipads must be reflective. This was achieved by broadcasting glass beads into the topcoat. The separate colors (red, white, black and tan) were done with integral colored quartz.

The project was a huge success and hospital personnel were pleased that the installation did not impact the trauma emergency landings.