The Main Ingredient for This Recipe? Seamless Flooring. 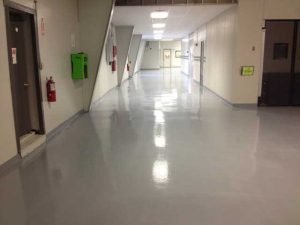 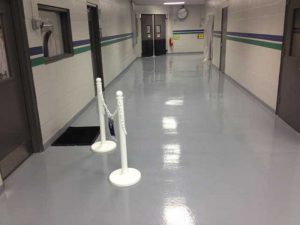 Facilities within the food processing industry present tough requirements – they need to handle the abuse of constant traffic and spills while serving as a reflection of the company’s commitment to quality and cleanliness. This New York food processing facility’s requirements were no different. As a producer of ingredients included in the daily meals for millions across the country, the focus on hygiene was paramount. Three years ago, the decision was made to invest in the facility, specifically on the floors that their products are produced on – with the understanding that this surface was an important factor in maintaining their stellar reputation. The existing floors within the facility were an assortment of worn epoxy coatings, bare concrete and vinyl tile. To ensure their new floors would serve as a hygienic surface that would withstand the various ingredients that would hit them daily, they turned to seamless flooring as the solution.

The facility is located in an area of New York with a particularly high water table therefore the soil is extremely moist. To combat any moisture in the existing concrete slab, Dur-A-Flex’s Poly-Crete SL was chosen as the base to all flooring systems installed in the facility. Poly-Crete SL offers a moisture tolerance of 20 lbs. per 1,000 sq. ft., providing protection against floor failures caused by moisture in the slab.

There were also many areas within the facility where trenching was needed for new pipes. These areas were patched with new concrete. Another benefit of using Poly-Crete SL was the ability to coat this new concrete just 5 days after it was poured. Poly-Crete SL allows for a variety of body and topcoats to be utilized depending on the needs of each area. The topcoats chosen for this facility included Poly-Crete Color-Fast, a cementitious urethane and Accelera, a quick curing, low odor option featuring a high gloss look. The colors were matched at Dur-A-Flex’s Design Center to ensure a consistent look throughout the entire building.

To make sure this bustling facility continued its daily operations as usual, the work was split into phases. With areas ranging from production rooms to mixing areas, installers worked weekend shifts and also sectioned off areas to complete their work during the normal work-week by using Dur-A-Flex’s Accelera low-odor, quick-cure floor system.