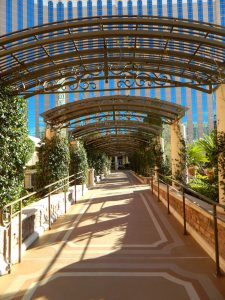 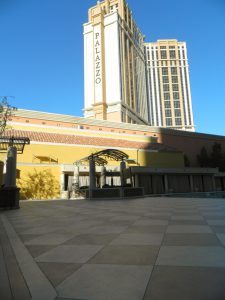 Whether guests were looking for a family friendly, resort style pool or a setting similar to a cabana on a private island, the adjoining pool areas of The Palazzo and The Venetian Resort met all the criteria. With artistic fountains and pristine landscaping guests could immerse themselves in their own private paradise, except for one thing – the connecting pathways and pool decks did not coincide with the rest of the ambiance.

The existing floor coatings from various manufacturers were failing, leaving unattractive, unsafe surfaces for guests to walk on. No one could be blamed for the failures except Mother Nature, herself. With temperatures ranging from 100 degrees by day and dipping as low as 40 degrees by night, the existing surface coatings couldn’t handle the thermal cycling, causing the coatings to lose their bond with the concrete substrate and delaminate.

To battle the elements and restore the beauty of the well-renowned retreat, Dur-A-Flex’s Hybri-Flex® MQ was chosen. This floor system harnesses the most powerful attributes of two chemistries; cementitious urethane and methyl methacrylate (MMA) to create a surface that offered tenacious bonding with a high tolerance for moisture. Since cementitious urethanes and concrete expand and contract at similar rates, they easily tolerate the thermal shock associated with Las Vegas’ temperature swings and eliminate the risk of surface failure. And MMA, known for its rapid cure time – one hour – ensured the new decks and pathways would install quickly, reducing any impact to guest services. Additionally, this system elevates safety levels with its slip resistant texture. A broadcasting of quartz into the MMA topcoat completed the multi-phase project, achieving the desired decorative look and complementing the overall décor.

The results yielded gorgeous, non-slip decks and walkways well-bonded to the concrete substrate prompting a slight modification to Vegas’ popular tagline, “What goes down in Vegas, stays down in Vegas!”